or, install from Chocolatey:

Project System Tools (2019 and below)

Instructions for building and running on Mac

Double-click the .binlog file to open it in MSBuild Structured Log Viewer: 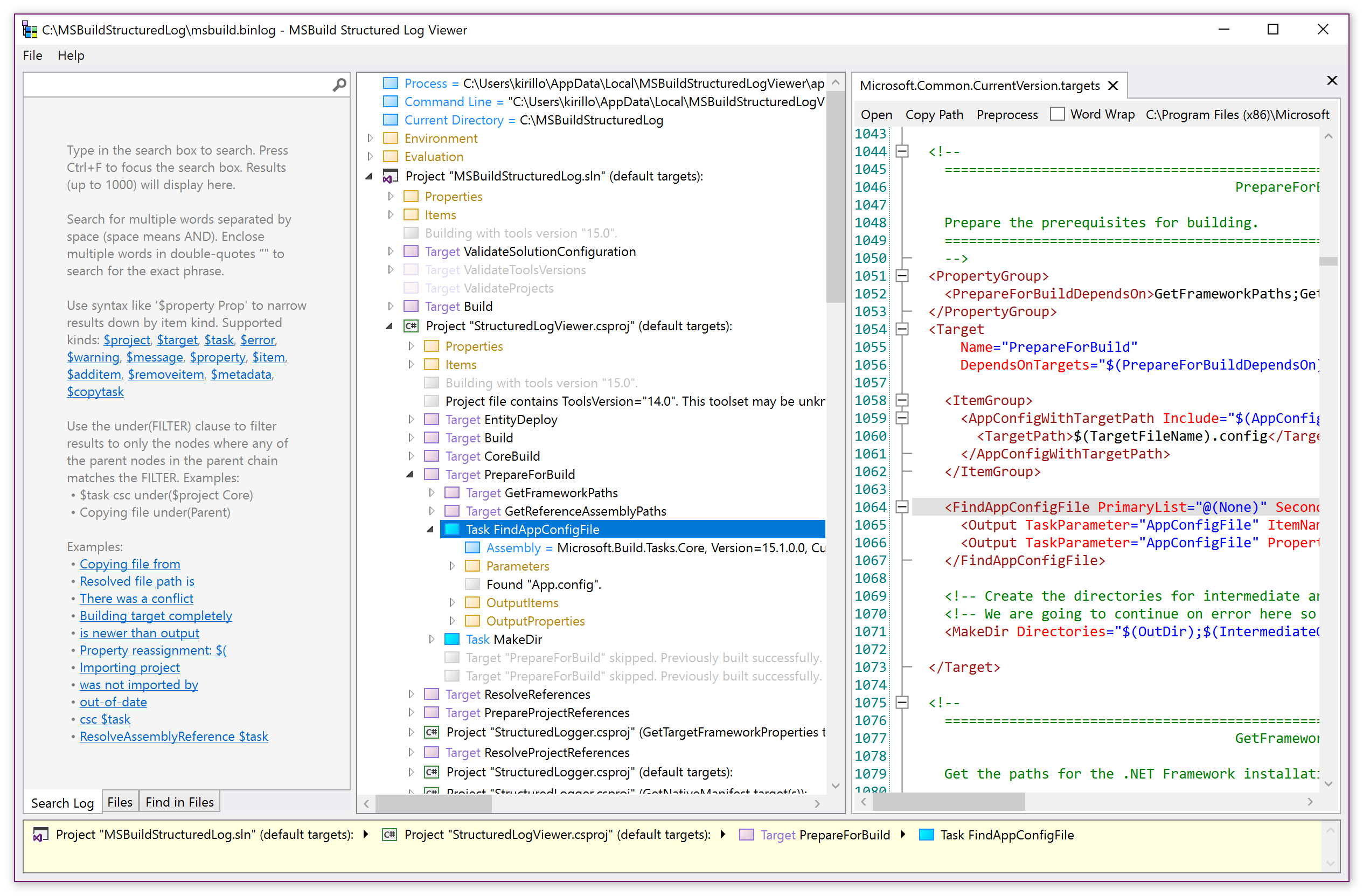 You can also produce binary logs from the dotnet build command by passing the -bl argument:

You can pass a .binlog file to MSBuild instead of a project/solution to replay it to other loggers, as if a real build was happening. This allows you to reconstruct a text log of any verbosity given the .binlog file. Read more at: https://github.com/Microsoft/msbuild/wiki/Binary-Log#replaying-a-binary-log 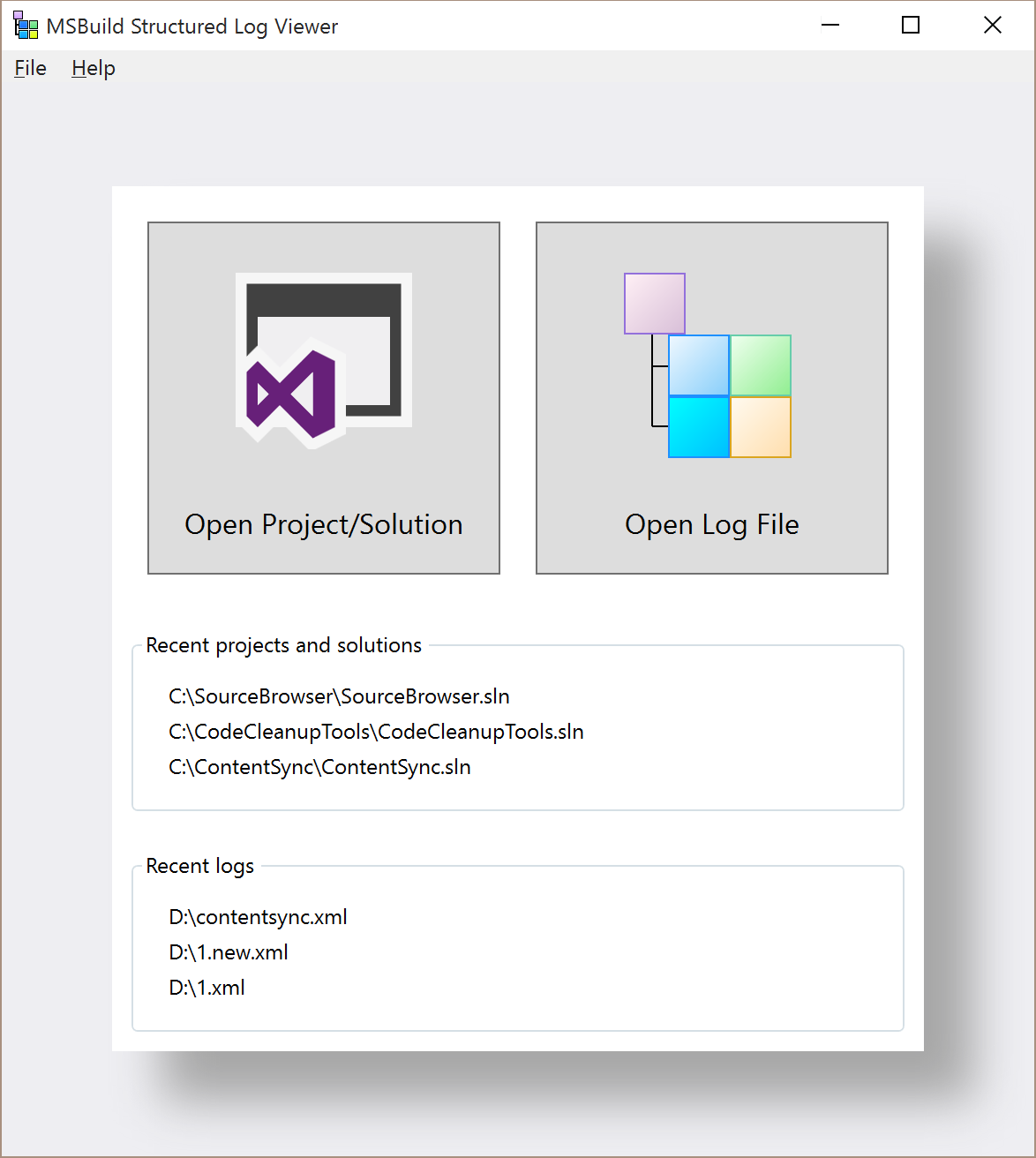 Leverage the source code of projects and targets embedded in the log file:

The viewer can read all formats and can save to *.xml.

Command-line help for the /bl switch

/binaryLogger[:[LogFile=]output.binlog[;ProjectImports={None,Embed,ZipFile}]] Serializes all build events to a compressed binary file. By default the file is in the current directory and named "msbuild.binlog". The binary log is a detailed description of the build process that can later be used to reconstruct text logs and used by other analysis tools. A binary log is usually 10-20x smaller than the most detailed text diagnostic-level log, but it contains more information. (Short form: /bl) The binary logger by default collects the source text of project files, including all imported projects and target files encountered during the build. The optional ProjectImports switch controls this behavior: ProjectImports=None - Don't collect the project imports. ProjectImports=Embed - Embed project imports in the log file. ProjectImports=ZipFile - Save project files to output.projectimports.zip where output is the same name as the binary log file name. The default setting for ProjectImports is Embed. Note: the logger does not collect non-MSBuild source files such as .cs, .cpp etc. A .binlog file can be "played back" by passing it to msbuild.exe as an argument instead of a project/solution. Other loggers will receive the information contained in the log file as if the original build was happening. You can read more about the binary log and its usages at: https://aka.ms/msbuild/binlog Examples: /bl /bl:output.binlog /bl:output.binlog;ProjectImports=None /bl:output.binlog;ProjectImports=ZipFile /bl:..\..\custom.binlog /binaryLogger

Recording a binary log with older versions of MSBuild

The built-in /bl switch was only introduced in MSBuild 15.3 (Visual Studio 2017 Update 3). However there is a way to record a binary log with previous versions of MSBuild as well. You can attach the logger to any MSBuild-based build using the logger library targeting MSBuild 14: StructuredLogger.dll. It is available in a NuGet package:

Use a command-line such as this to pass the BinaryLogger to MSBuild:

Additionally, the source code of all project (.csproj) and targets files (.props, .targets, etc) is embedded in the .binlog file as well.

Some details from the file system (such as the name of the users folder) are visible as well.

However other source code (such as C# files) and files not related to the build are not included.

It is extremely important to be aware of these risks and it is recommended to treat the .binlog files like you treat your source code.

You may also need to reference MSBuild Microsoft.Build.Framework.

There are various APIs for various scenarios. A high-level API to read a .binlog file into a tree structure that you normally see in the viewer is:

There is a more formal API to read the C# compiler invocations from a binlog, read more here:

If you need a lower-level API to read the raw .binlog records yourself you can use BinLogReader.ReadRecords(string binLogFilePath):

Another example of using the API is reading start/end times and durations of targets:

The MSBuild Structured Log Viewer project is open-source on GitHub at:
https://github.com/KirillOsenkov/MSBuildStructuredLog

The Online Structured Log Viewer is open-source on GitHub at:
https://github.com/laurenprinn/MSBuildStructuredLog

This webpage is also open-source at:
https://github.com/KirillOsenkov/MSBuildLog